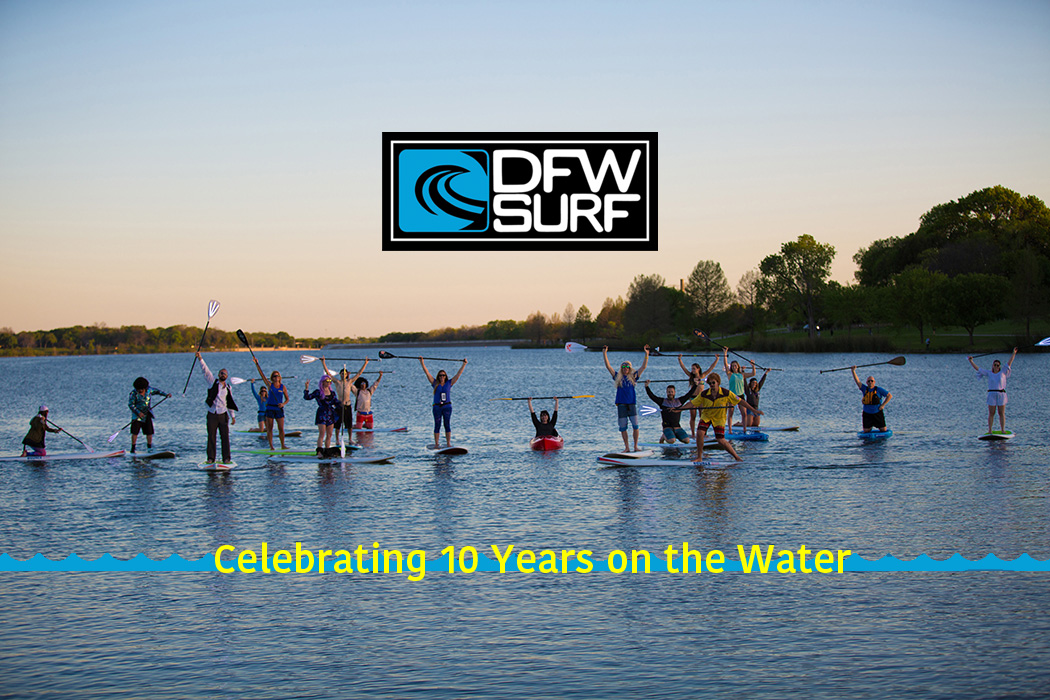 Wow!  What an amazing journey that all started back in 2007 right here on Lake Grapevine near DFW Airport.  1o years later here we are, still doing what we love and continuing to introduce North Texans to an outdoor lifestyle of relaxation and adventure.  Water is therapy and we founded a company supported by athlete coach therapists who have laid the foundation for a community that people call “home.”  We look forward to many more years to come and we invite you to also join our surfing community- the DFW Surf Club.

In 2007 we entered the scene via wakesurfinglessons.com and helped pioneer a new way to surf and that same year we produced the first ever wakesurfing events in Texas including the Land Locked Surf Fest at Texas Mastercraft in Fort Worth.  The new sport of wakesurfing was very much in its infancy and it was our goal to spread the word- one person at a time.  Today the sport of wakesurfing is in full swing and it is amazing to see how many people are doing it compared to its predecessors- waterskiing and wakeboarding.

But wait … there was another sport where you can hop on an oversized surfboard and walk on water?  Stand up paddleboarding (SUP) was the opportunity we had been waiting for.  From Hawaii to California and Florida to Texas and the rest of the world- BOOM!!- this was what the world was waiting for and a chance for anyone and everyone to call themselves a “surfer.”  You can use a “SUP Board” to paddle from point A to point B, you can surf it, you can do yoga, you can even surf with your dog.

Our original location near DFW Airport on Lake Grapevine grew quickly across the metroplex.  The goal was to continue to introduce as many people as possible to the new “lake life”- from kayaking and waterskiing to inland surf sports- wakesurf and SUP.  We opened up the first ever floating surf shop at Pier 121 Marina along with various other locations.  If there was water, indoors or outdoors, we wanted to be on it, from lakes to rivers to aquatic centers like LifeTime Fitness.

Here’s to another 10 years on the water!